Biko (Filipino Rice Cake). Biko (pronounced bee-koh), a rice cake, is a native Filipino delicacy or 'kakanin' where glutinous rice is cooked with coconut milk and brown sugar then topped Latik. The latik can be either in curd form or syrup. Pinoy recipe – [biko] glutinous rice cake [traditional filipino recipe]. 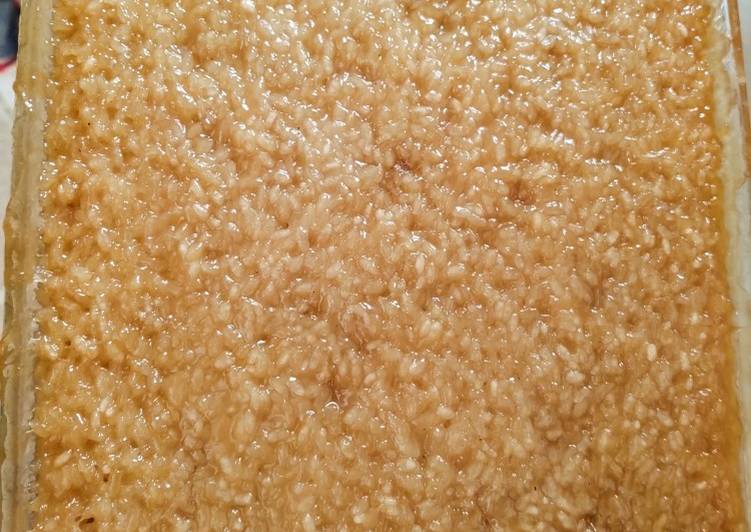 It's an easy and simple homemade dessert that is popularly served at Rice is a staple in Filipino cuisine (and many other Asian countries). Biko is a Filipino rice cake made from sticky rice (locally known as malagkit), coconut milk, and brown sugar. Like other rice cakes, this is referred to as kakanin (derived from the word "kanin" which means rice) and is often eaten as dessert or meryenda (mid-afternoon snack). You can have Biko (Filipino Rice Cake) using 4 ingredients and 9 steps. Here is how you achieve that.

There are many variations on biko, but this biko recipe will give you a sweet dark brown-sugared sticky rice cake topped with a caramelized coconut sauce and latik (crispy coconut curds). Each decadent bite of this traditionally Filipino dessert is filled with flavors of palm sugar, dark brown sugar, and rich. Filipino Biko Recipe, consists of malagkit (glutinous) rice, coconut milk, sugar, and topped with "latik". Biko is a rice cake with caramel topping or latik and here is the recipe for Biko.

Sweet Sticky Rice With Fried Coconut Curd Topping. Biko is the quintessential Filipino native delicacy. It is made from glutinous rice that is first partially cooked, then mixed with coconut milk until very thick in consistency. Filipino Dessert Recipes. » Biko (Rice Cake with Caramel Topping). Have You Tried These Other Filipino Desserts ?